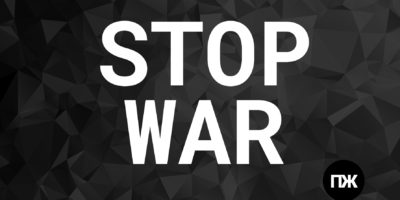 In 1994, the UN General Assembly declared that May 3 would henceforth be celebrated as the World Press Freedom Day. On this day, the Union of Journalists and Media Workers are going to hold an event titled Journalists Behind Bars: members of the Union, as well as all civically-minded people, will be writing letters to people who have faced persecution for their professional activities, and have either been convicted or are in awaiting their trial in preliminary detention.

According to the Union’s data, there are currently 18 journalists in Russian prisons who are victims of repressions as a result of performing their professional duty. Before the war in Ukraine started, this list contained 13 names, yet the past month alone has brought 5 new arrests related chiefly to the journalists’ protest against the invasion of Ukraine.

Of the 18 who are in jail, 15 are men and 3 are women. Some have underage children. A number of international media associations and human rights organisations have already voiced their support for them. 8 of the people on the list were recognised by the Memorial Human Rights Centre as political prisoners.

“Raids, arrests, long and excruciating detention, harassment and intimidation of family members, trials and jail, endless violation and denial of all rights, sometimes they are even kept in the dark as to what the charges against them are… All of these are part of journalists’ ordeal in today’s Russia. In the early 90s, there were only 17 journalist prisoners in all of Africa. The fact that Russia is presently demonstrating a more worrying situation and that our country is rapidly heading towards a scenario of mass repressions and total state control on the freedom of information is giving rise to major concern. In these truly tough times, we would like to speak up for those who have already had their freedom taken away and have paid a tremendous price for acting in accordance with their conscience and professional duty,” says Sofia Rusova, co-chair of the Union of Journalists and Media Workers. She also pointed out that incarcerated journalists are badly in need of hearing both words of encouragement and updates on what is happening outside.

The Union of Journalists calls for an end to infringements upon the freedom of speech and media representatives, firmly opposing political and economic control over media.

Valov was involved in investigating the corruption schemes employed by the local authorities, covering the aftermath and the consequences of the 2014 Olympics. The criminal proceedings against him were initiated on request from Yuri Napso, a parliamentary aide who was frequently featured in Valov’s articles. In 2018, he was given a 6-year jail sentence on charges of major extortion (Article 163 of the Russian Criminal Code, Part 2, Para “g”).

Valov is serving his sentence in Penal Colony-14 in Angarsk.

His co-workers believe his prosecution was linked to the political pressure targeting the newspaper staff. Gadzhiev has been in jail since June 14, 2019. He is being charged with involvement in a terrorist (Part of 2 of Art. 205.5) and extremist organisation (Part 2 of Art, 282.2), as well as with financing terorism (Part 4 of Art. 205.1) and is facing potential life imprisonment.

Safronov has been incarcerated since July 2020 on charges of two counts of high treason. He is facing a prison sentence of up to 20 years.

In the spring of 2021, Crimean FSB operatives discovered a hand grenade in Yesipenko’s car. The prosecution claimed that the journalist had been planning to sell it. The Memorial Human Rights Centre called attention to a number of controversial points found in the case materials and recognised Yesipenko as a political prisoner.

Zarifa Sautieva, administrator of Fortanga outlet and deputy director of the Memorial Complex Dedicated to Victims of Political Repressions in Ingushetia

Taking an active part in protest action and covering them, she was arrested in 2019 on charges ofviolence against representatives of authority. .

In his documentary titled Criminal Oil he had exposed the oil embezzlement schemes in operation in Nizhnevartovsk district of the Nizhnevartovsk region of the Khanty-Mansiysk Autonomous District involving law enforcement officers, including some FSB ex-employees.

Katelevsky had been involved in crime and corruption investigations and was arrested after publishing a documentary covering corruption in the funeral services sector.

He is being charged pursuant to 3 articles of the Russian Criminal Code: wilful destruction or damage of property (Part 1 of Art. 167), extortion (Para “b” of Part 3 pf Art. 163), public insult of a representative of authority (Art. 319).

He has been held in preliminary detention since 2020.

Dorogov had been involved in corruption and crime investigation and was arrested after publishing a video exposing the criminalisation of the funeral services sector. He was charged with extortion, public insult of a representative of authorities, armed hooliganism (pursuant to Para ‘b’ of Part 3 and Para ‘a’ of Part 2 of Art. 163, Art. 319, Part 2 of Art. 213).

Bakirov widely covered the repressions against Crimean Tatars. He was arrested on March  28, 2019. In March 2022, he was given a 19-year prison sentence to be spent in a high-security prison for alleged involvement in involvement in creation of a terrorist organisation (Part 1 of Art. 205.5 of the Criminal Code).

One of the first streamers to bring into focus the repressions against Crimean Tatar activists, he has been in jail since 28 March 2019 on charges of involvement in a terrorist organisation” (Part 2 of Art, 205.5 of the Criminal Code) and preparation to forcible seizure of power (Part 1 of Art. 30 and Art. 278). Under the former provision, he is facing up to 20 years in prison under the latter — up to 10.

Zelensky has been charged with incitement to extremist activities (Part 2 of Art. 280 of the Criminal Code) on the basis of 2 emotionally charged tweets referring to the suicide of journalist Irina Slavina by self-immolation. In April 2021, he was given a 2-year prison sentence which he is serving in a penal settlement.

Specialising on stories about industrial and transportation facilities, he was arrested in August of 2020 after filming a new video for his blog. Pyzh was charged with disclosing information classified as state secret abroad (Para “d” of Part 2 of Art. 283.1 of the Russian Criminal Code), on allegations of smuggling the layouts of the military Metro 2 structures into Ukraine.

Was given a 5-year prison sentence.

Kuznetsov was the admin of the local chat “What is to be Done?”, the members of which would discuss possible protests in the event of 2021 election frauds. He was arrested on charges of incitement to mass riots (Art. 212 Part 1.1. of the Criminal Code) and transported to Moscow. He is facing a prison sentence of up to 10 years.

Kuznetsov continues to be held in custody.

Skochilenko had replaced a few price tags at a shop with anti-war pamphlets. For doing this, she was charged with public dissemination of deliberately misleading information about the use of the Russian armed forces (Art. 207.3, Part 2).

She is facing a potential 10-year jail sentence.

Skolichenko is being held in St Petersburg’s Preliminary Detention Jail No5.

Afanasyev has been charged with public dissemination of false information about the use of the Russian armed forces (Art. 207.3, Part 2, Para “a”) for publishing information about 11 officers of the National Guard Special Task Force refusing to go fight in Ukraine.

He is facing up to 10 years’ imprisonment.

Afanasyev continues to be held in jail.

Mikhailov is being prosecuted on charges of public dissemination of deliberately misleading information about the use of the Russian armed forces (Art. 207.3, Part 2, Para “d”) for re-posting articles covering the developments in Ukraine in his edition’s Telegram channel.

Mikhailov continues to be kept in jail.

Providing coverage of protest actions, Ponomarenko had been repeatedly fined for participating in such and simply for voicing protest sentiments.

On April 24, she was arrested on charges of public dissemination of false information about the actions of the Russian armed forces. for publishing a post about the Mariupol theatre bombing. She is now facing up to 10 years in prison.

Arrested on April 27, 2022, he has been charged with repeated violation of the regulations on organising mass actions (Art. 212.1 of the Russian Criminal Code) for calling upon taxi drivers and employees of delivery services to go on strikes against labour rights violations.

Ukraintsev is facing up to 5 years in prison.